World Ending Game is a tabletop game written to serve as the last session of a campaign in any system. It should come after the finale, whatever that is for your table; the dragon defeated, the government felled, finals week over, the great mystery solved. World Ending Game does not have mechanics for deciding big story outcomes. Instead, it offers a series of scenes and vignettes towards closure.

A series of small games that you can play to end a campaign or story, for when it is time to say goodbye. 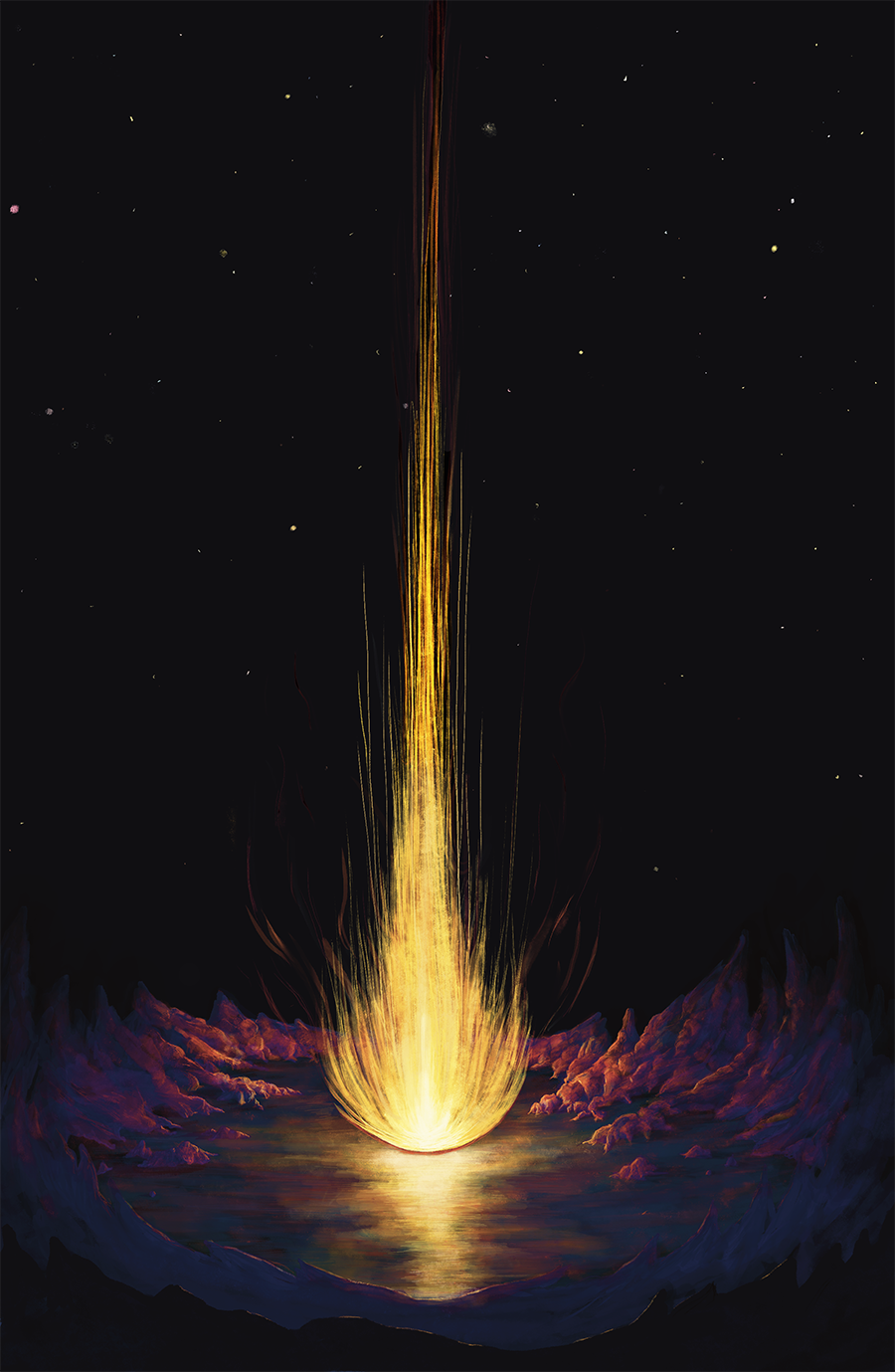 World Ending Game is a falling-action game. Many existing game systems excel at climactic final battles or big-stakes adventures, but don't allow you to sit in the aftermath, thinking about all that has come before and imagining what could come after. World Ending Game is a tool to let you do just this; gather your things, say what you need to say, and walk away from the story you've been telling with confidence and pride.

Inside of World Ending Game are a set of overarching rules for conversation, and then 20 small games, called Endings. These Endings form the scenes of World Ending Game, compounding and building on one another to form a session of play. Players pick scenes for their characters, while the GM takes on the role of The Director, controlling the camera, the lighting, the mood, and the frame for each Ending.

In general, World Ending Game is cinematic, meant to emulate the last 20 minutes of a movie. It understands the power of a series of images and the impression of a final shot. It wants to wrap your story into a sequence that will haunt you, even as you leave it.

Players;
Know what you want, trust your motivations, and flow from action to action and line to line. Make space for others to join in.

Director;
Introduce your directions into scenes, then retreat to watch and listen. Set the pace and keep the rhythm.

Both;
Treat the conversation like a piece of music. Find joy in the act of playing it to finish, in concert with others.

The Table of Contents;

Each Ending has a full-page facing illustration, commissioned from 20 incredible artists.

And a bookplate by H.B. Tyson

The layout and book design of each Ending responds directly to the artwork, as well as the contents and narrative of the Ending itself. Designed by Andy Pressman, these spreads are visually distinct and bold, tied together through shared design language but also unique from one another in palette, typography, layout, and tone. 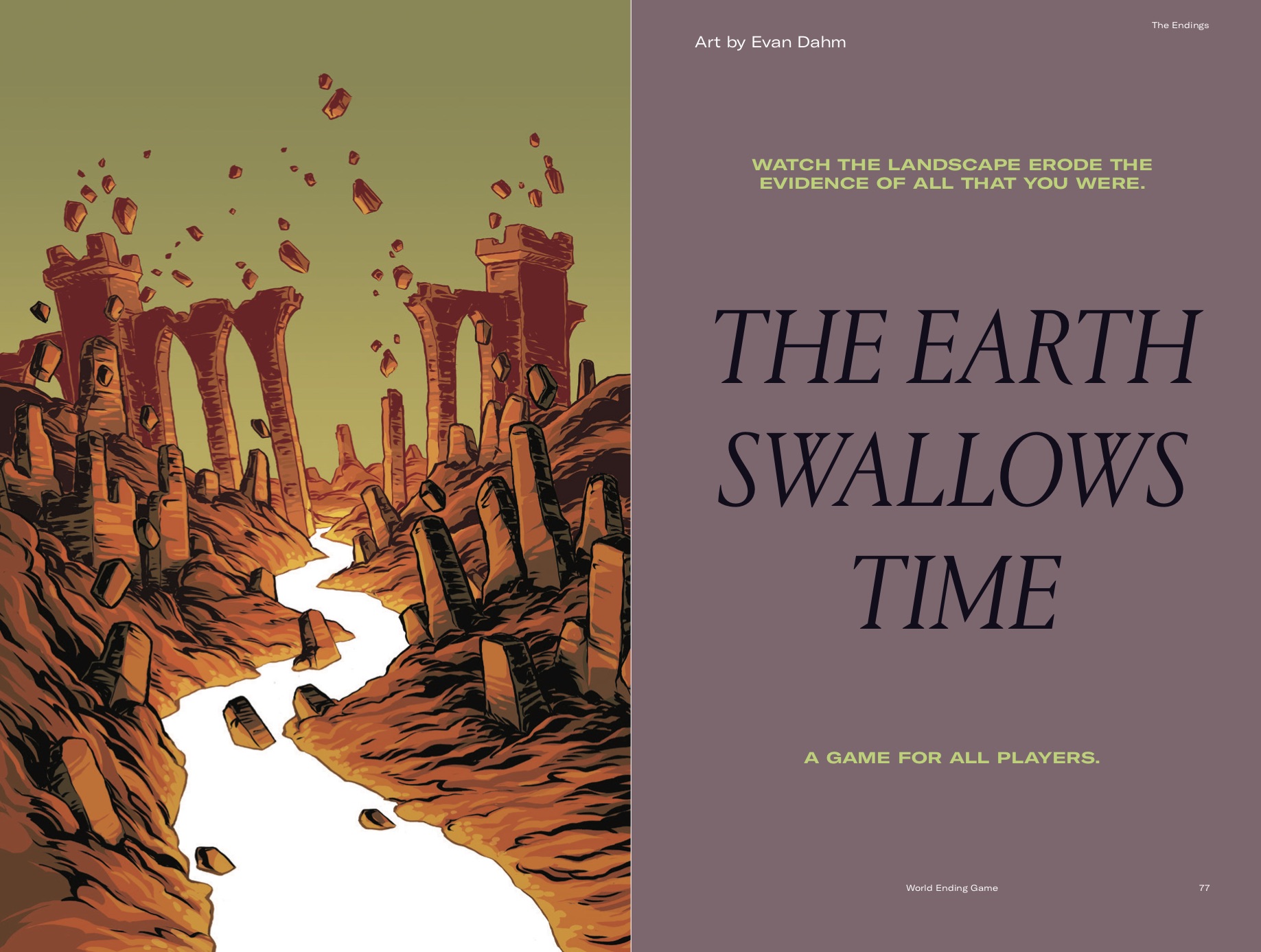 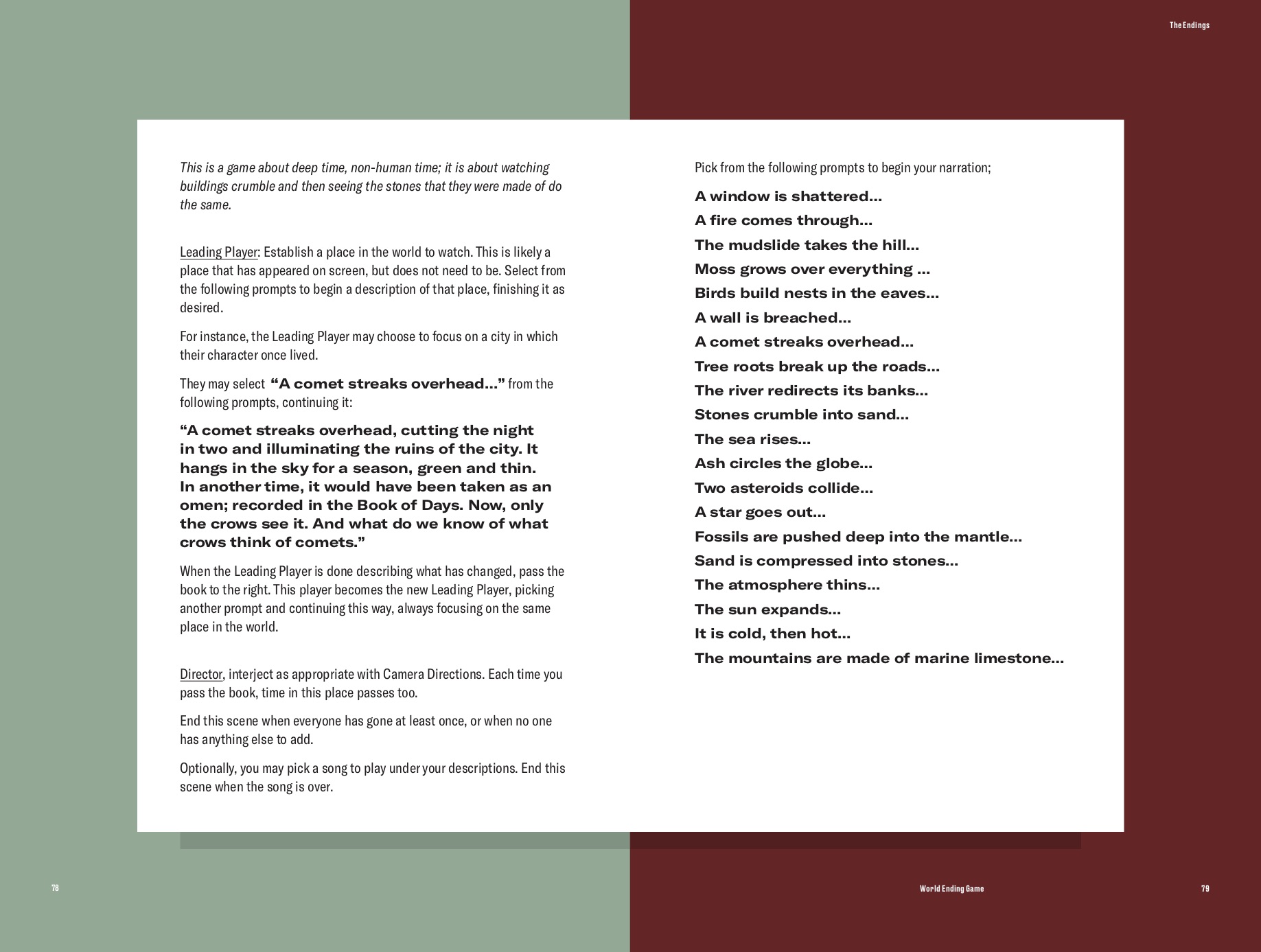 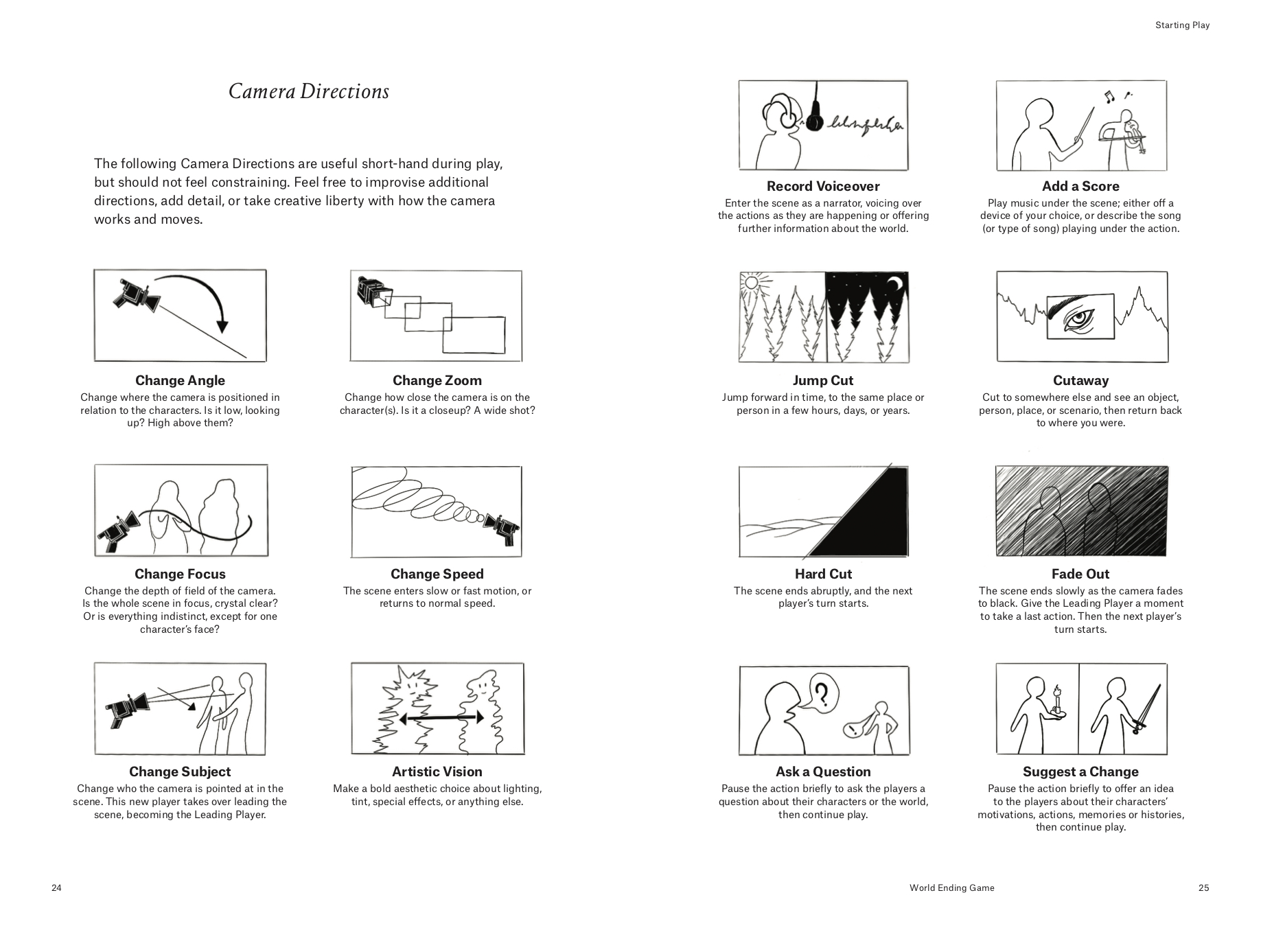 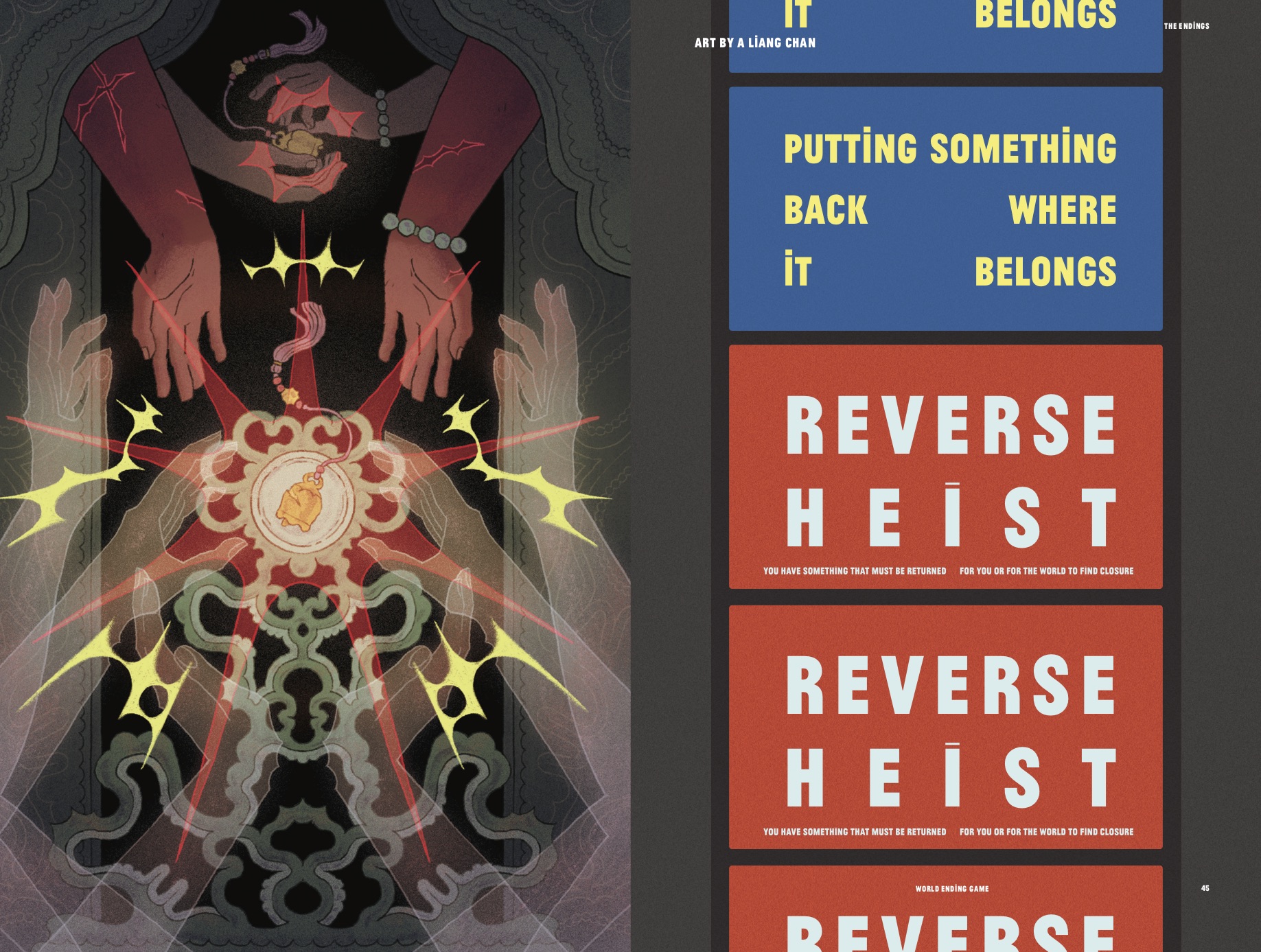 Camera Directions and A Liang Chan for Reverse Heist 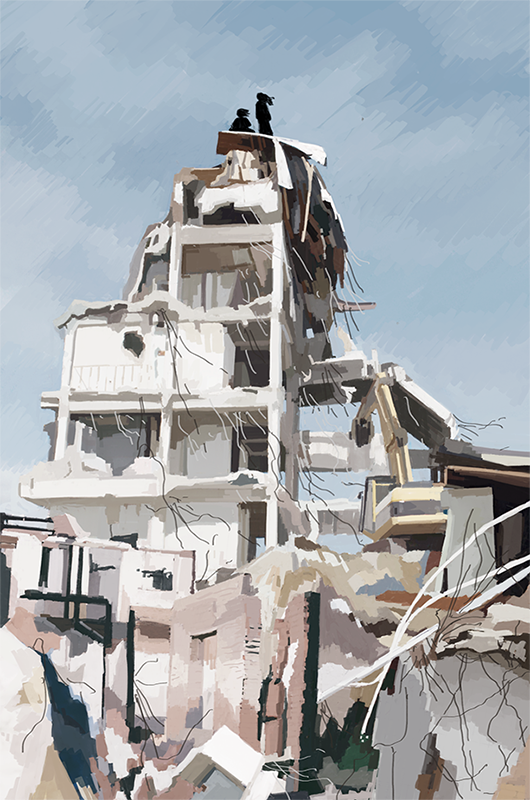 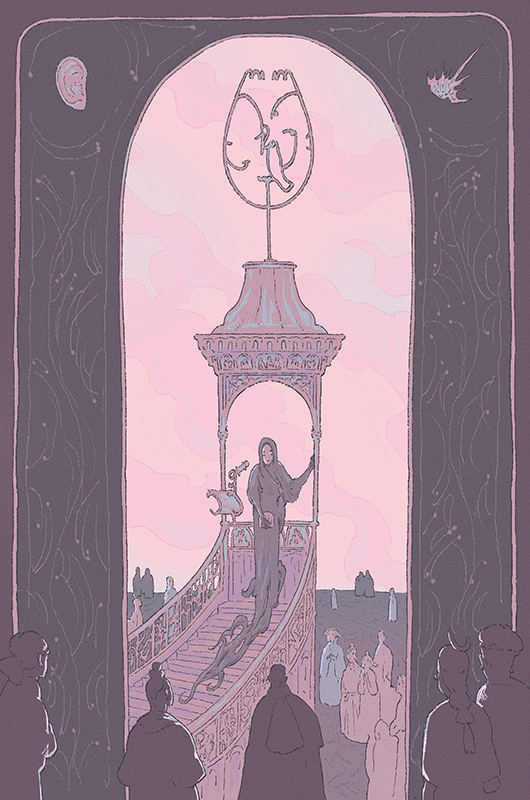 Madeline Miyun for Wrecking Ball      Nadhir Nor for The Confession

Though perfectly functional and still beautiful as a digital pdf, World Ending Game is designed to be held in the hand.

Working with Bookmobile, a Minneapolis-based press that specializes in short-run art books, the print edition of World Ending Game is a 6.125” x 9.25” paperback, with a gold foil stamped cover, heavy interior paper, and full-color printing throughout. It comes with a bookmark printed with the (mechanically-relevant) camera directions, and a bookplate on which to write your name.

The print edition is slightly delayed (print proof back and forths, supply chain shortages, etc) but will be out in fall of 2022. You can still preorder the print edition at the very bottom of this page. 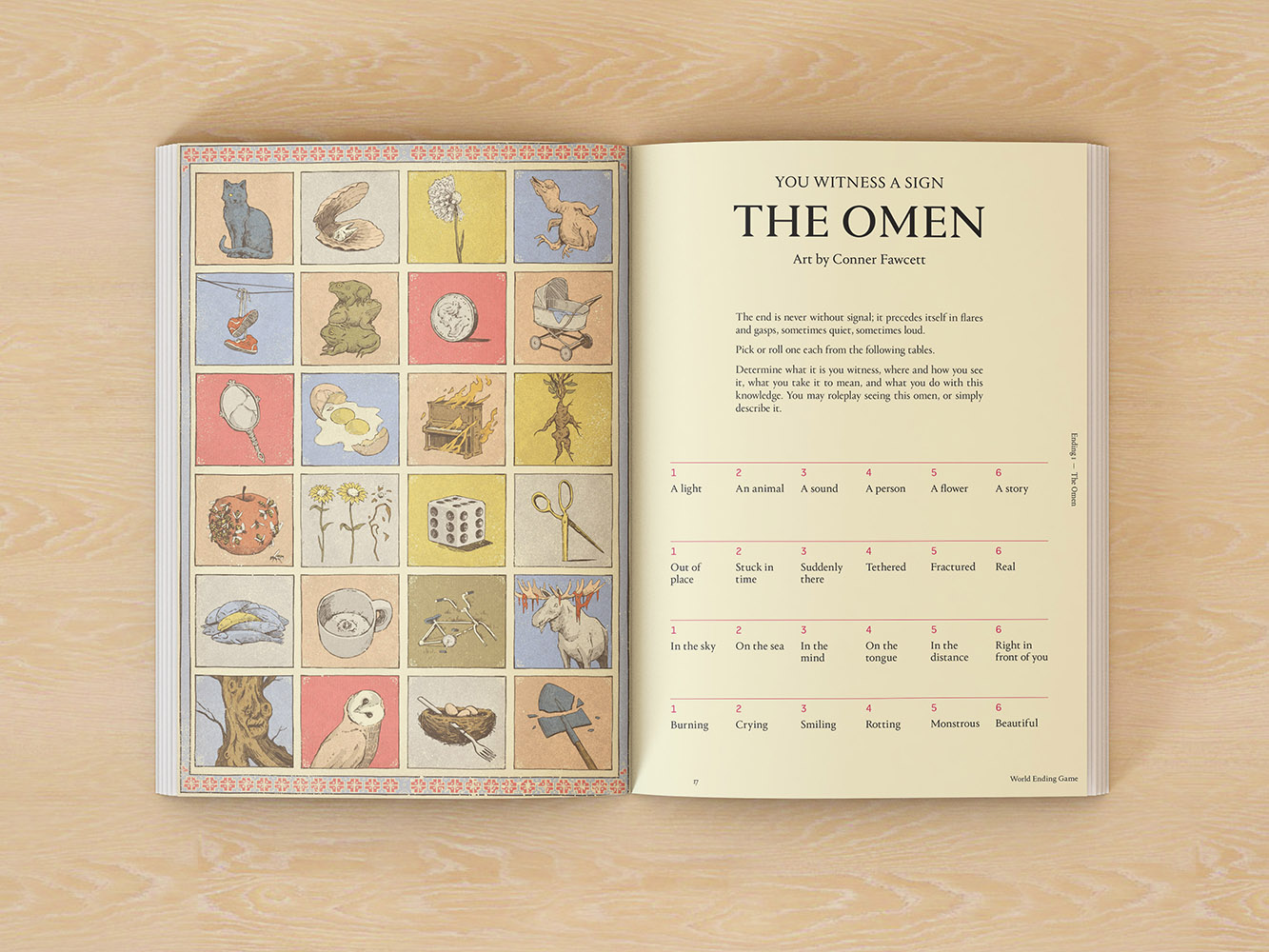 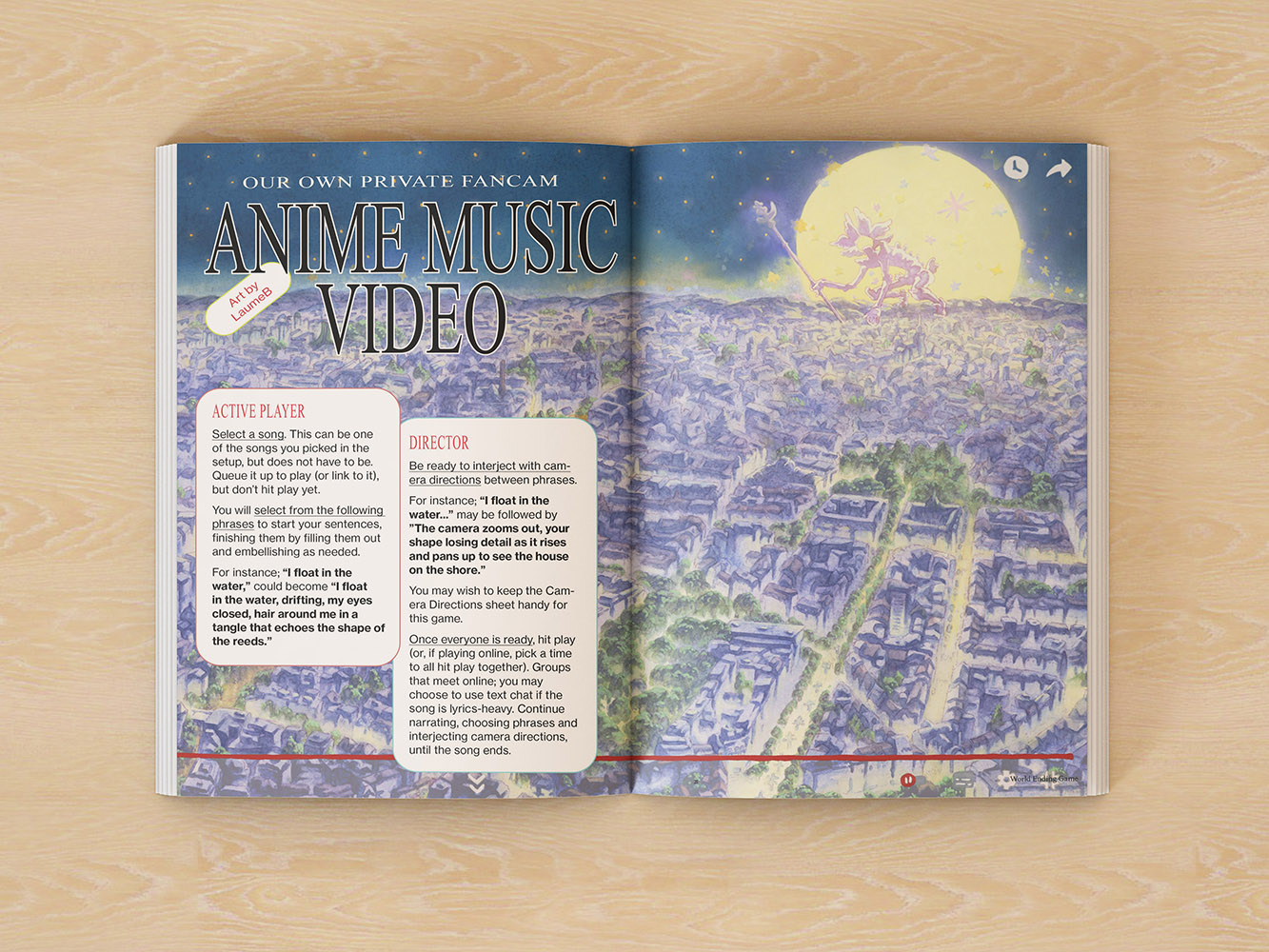 Conner Fawcett for The Omen       LaumeB for Anime Music Video

World Ending Game was funded through presales on itch in summer of 2022. The book had raised 30k by launch (out of it's 35k total production cost), with the remainder of cost to come from future sales. If you bought the game in advance, it has been automatically added to your itch library and can be downloaded here! Paper copies will ship in fall, when I have them- I’ll send out a backer survey when they are ready to ship. 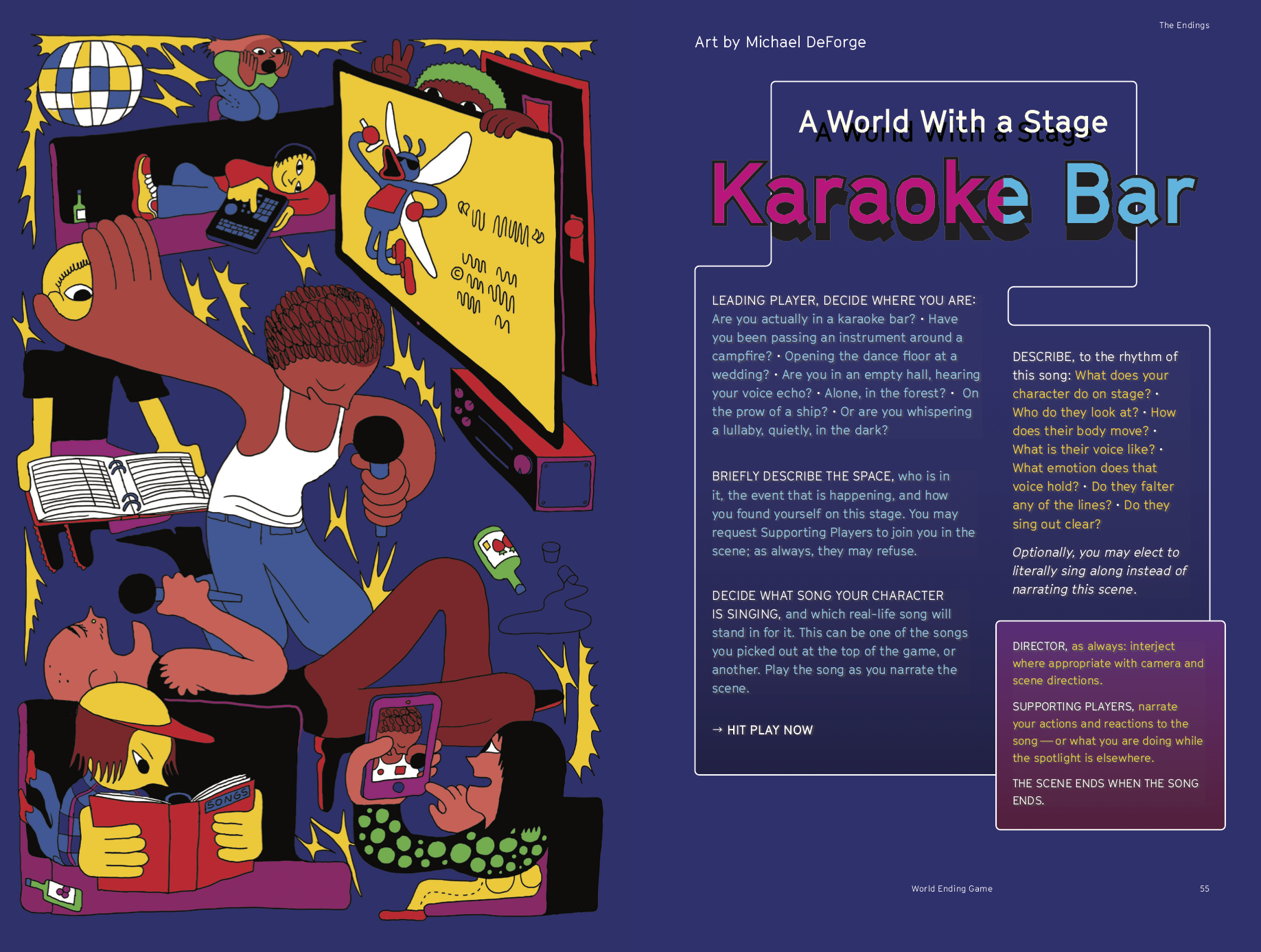 Do you have questions about development? Are you a distributor or storefront interested in wholesale? Would you like to request a community copy?

In order to download this game you must purchase it at or above the minimum price of $15 USD. You will get access to the following files:

Support this game at or above a special price point to receive something exclusive.

$35 - A print copy of World Ending Game, shipped within the United States

$50 - A print copy of World Ending Game, shipped anywhere else in the world

$125 - Three print copies of World Ending Game, shipped anywhere else in the world

I’m currently undergoing the arduous process of finishing a long term campaign (4+ years of playing, and many years before that of prep). This book has come to me at the right time, and really speaks the stories I want to help tell and remember. 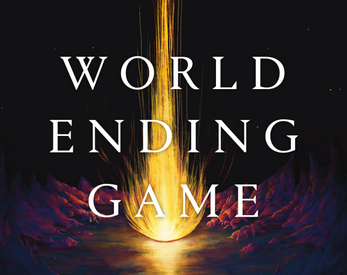